Since December 2017, the Certificate of Sponsorship (CoS) award cap were reached five months in a row before the end of each month. It is therefore much more difficult for Tier2 work visa applicants to get a positive answer, if they are not in Shortage Occupation List. Thus, the minimum salary required is also increasing, compromising the ability of many small businesses to hire.

This is a purely mathematical problem. Every year since 2011, 20700 Certificates of Sponsorship (CoS) are issued, the total being split into monthly allocations during the year. If fewer people apply for a british Tier2 work visa, remaining Certificates of Sponsorship are available the following month and like this until the end of the fiscal year, which begins in April. So if the demand remains low there are mathematically more certificates available in the end of the fiscal year.

Since 2015 there was no problem of shortage as the annual limit was always greater than the demand, but the trend began to reverse in June 2017 according to The Migration Observatory at the University of Oxford, when the number of visas awarded began to exceed the number of CoS available.

However, there was still a reserve as long as the unused CoS of 2016 fiscal year and the beginning of 2017 were carried forward from one month to the next one: the Certificates of Sponsorship could still be awarded, despite the sharp rise in Tier2 work visa applications. This reserve ran out in December 2017, and since then the lack of Certificates of Sponsorship is reached before the end of each month, while the demand is constantly increasing. The only hope is when any previously distributed Certificate of Sponsorship are not awarded, and become available again after a period of 3 months. There were only 10 reallocations for April 2018. 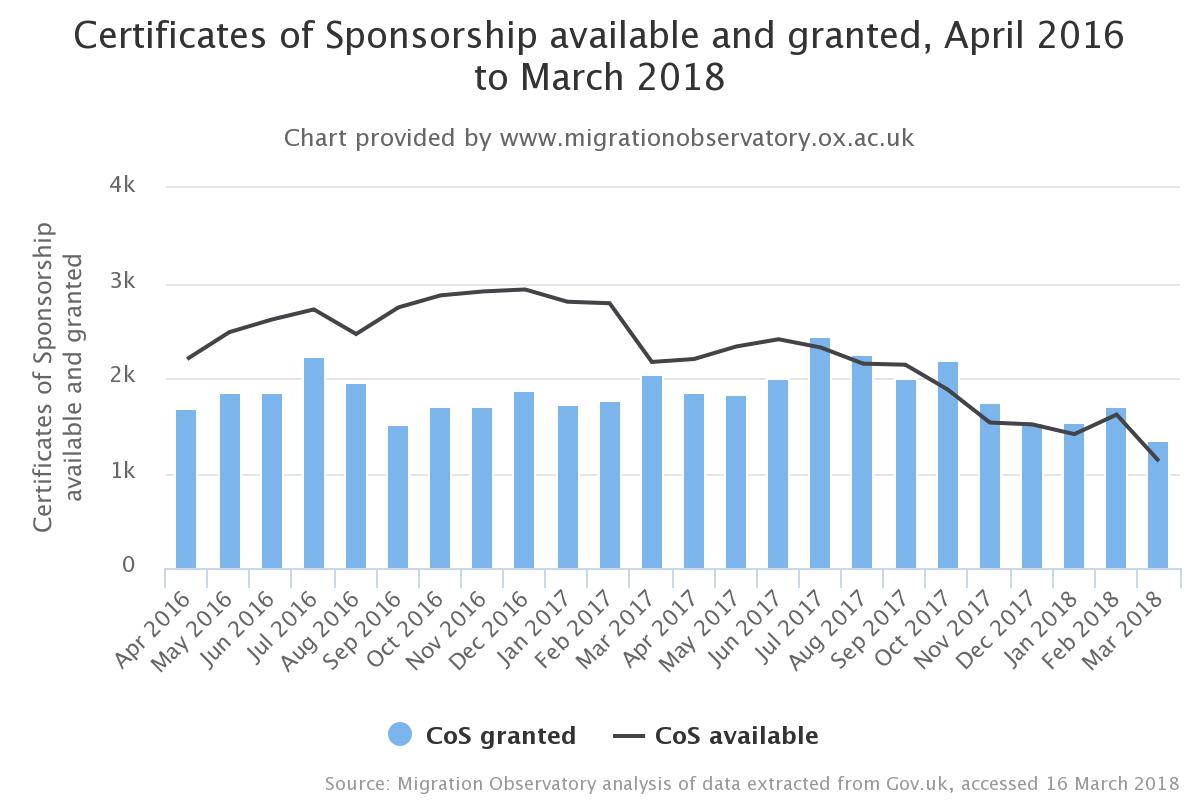 British Tier2 work visa : incertainty for the next months

The direct consequence of this Certificate of Sponsorship shortage is that the Home Office has become much more demanding and prioritises UK Tier2 work visa applicants on the Shortage Occupation List (130 points), and then jobs that require a PhD (70 poins), as well a good level of salary: the higher it is, the more points are awarded. Until the end of 2017, the minimum Tier2 visa requirement was 21 points, rising up to 55 points in December 2017, and to 46 points in April 2018.

And since European citizens are generally better paid for similar jobs than non-Europeans, British companies are reluctant to pay non-Europeans when the CoS minimums reach these European levels. This directly affects small and medium businesses that simply can not afford to hire skilled workers with such high pay levels.

As a result, Tier2 visa applicants with a job offer, whose salary does not meet these conditions are systematically rejected, except if the position was on the Shortage Occupation List or if the position was open to a PhD graduate. Only posts with high salaries and qualifications are therefore filled. Employers themselves are uncertain because of the fluctuation of this minimum level as they can not know it in advance and plan their recruitment campaigns on it. Of course, this worsens the economic and political class. One of the solutions would be to increase the annual limit of the Certificate of Sponsorship awarded and to exempt certain professions from these selection criteria, particularly in Health Service, which is strongly affected by this situation.

This shortage obviously does not concern UK Tier4 general student visa who can switch into Tier2 at the end of their course, a dependent partner of someone with a Tier 4 visa, Tier2 visa holders who wish to change their employers, or Tier1 UK visa holders, all applying directly from within the UK.

All informations on this page have been last updated on : 3 August 2018

It is obligatory to apply for Spouse, Fiancé, Dependent family member visa for EU (European Union) citizens since January 1, 2021, if you would like to join your family member in the UK. (read more...)

In case you stay in the UK during the Covid-19, and your visa expires within the period from January 24, 2020 to July 31, 2020, you can request an extension for your visa until July 31, 2020. This rule was introduced due to travel restrictions and self-isolation. (read more...)

In case if your 30 day visa to travel to the UK for work, study or to join family has expired, or is about to expire, it is possible to request a replacement of this 30 days visa with new dates for free until the end of 2020. (read more...)

Since the 6th July 2019 you can no longer apply for UK Tier 1 Graduate Entrepreneur visa. It was replaced by UK Start-up visa. The main similarity in obtaining both two visas is that the applicant must have a unique idea for starting a business in the UK. (read more...)

The new system of documents electronic upload of the UK Visa Application Centre TLS Contact, introduced at the beginning of the 2019 year, leaves much to be desired. (read more...)

Visa applicants, who submitted their UK visa application before January 31, 2019, will not be able to use the web-site of the TLS Contact UK visa centre to check the status of their visa application. (read more...)

You need a UK Tier4 student general or child visa in case of long-term studies in universities and schools in United Kingdom. The period of validity of the visa depends on the duration of the course.

UK Skilled Worker visa (ex Tier2 Work visa) allows qualified specialists to work in the UK. Depending on your employer, period of contract and position your visa can be issued for up to 3 years and more.

UK Tier1 Graduate Entrepreneur visa is awarded to graduates of UK and foreign universities with entrepreneurial or research and development projects in the UK. This visa is issued for a period of 12 to 24 months.

You need UK Tier1, Tier2, Tier4, Tier5 Dependant visa if you wish to go to the UK to join your spouse/unmarried partner or parent (if you are 18 y.o and younger) who is working or studying under a Tier Points-based system in the UK.

I used Visa Consulting services many times for different types of visa, starting from tourist visa later my tier 4 study and post study visas. I was surprised that they also helped me with more difficult visa recently such as TIER 2 visa. All documents were checked properly, gilded and small details and knowledge which was provided was done on high level as a proper solicitor would advise, however there charges are much more less then lawyers even other service providers. HIGHLY RECOMENDDED! Tested many times on different and difficult visa types. Service is always prompt and professional!